A Statement of Life and Work ofFriedrich Wilhelm Fiegenbaum, a Minister of the Gospel

I was born in KirchenspielLengerich Grafschaft Tekelburg Bezirk Muenster Koenigsreich Preussen Germany,the 11th of April 1830. I am the fourth child and third son. I was baptized inchildhood and received the name of Friedrich Wilhelm. When I was four years old,we left the old country, set sail for New Orleans, North America. Nine weeks wewere on the sea where we saw nothing but the blue sky and water and ship inwhich we lived at that time. The last part of June 1834 we landed in NewOrleans. Then we went up the Mississippi River to St. Louis, Missouri which wasthen but a small town where we landed about third or fourth of July 1834. Fromthere we traveled west by wagon and about sixty miles crossed the Missouri Riverat St. Charles, then west on the north side till we struck the line of WarrenCounty, or near it, where we lived about seventeen years. The first night or twowe camped in a sugar camp hut, and in the morning Father saw a great big greywolf, sitting on a large box which served us as a door because there was no doorto the hut. God protected us. Now what was to be done? Seed time was over. Nomoney. Nothing could be done but work by the day. Wages were four to five bits aday. In the fall of this year, we moved to another house in the Missouri RiverBottom. A log house, one room. The next summer we all took down very sick withthe ague. No doctor at hand. No money to pay one if there had been. So we had tostand it without help or sympathy of anyone but God. After cold weather came,the ague stopped. After some four years we moved south about twelve miles, andFather bought forty acres of congrefs land in the bluffs where it was morehealthy1. This was our bodilycondition, but what was our spiritual condition? No schools, no church, fortymiles to fifty miles. This is the beginning of my life, children. Don’t beashamed of me. Remember what God has done for me and you too. Serve the God ofyour grandparents and your parents too and you will do well. At the time all wasEnglish with few Pennsylvania Dutch mixed. But by and by more Germans came overfrom the Old Country and settled near us. About this time schools wereestablished, English. Then the rule was the child that came first recited first.Three months school in year in winter was about all. Then came a German schoolteacher over from the Old Country and we started a German school. I had to gofrom two to five miles to get there. O, how poor the people were; not only we,others no better than us. I went to school in wooden schools, think of that? Wecould not buy better schools. Had no money. Went four winters, each winter aboutthree months. That was about all the school I ever had. All the rest I know Ilearned at home, a self-made man. O, what a poor one? Corn sold for ten tofifteen cents a bushel. Smoked ham and shoulders two to three cents a pound. Wehad by this time plenty to live on, but O, our poor souls. My mother would workand weep, a week or two at a time. Then again she would sing old German churchhymns. Then at such times I would ask her, “Mother, why do you cry?””O, child,” she would say, “I can’t tell you.” Then againshe would say to Father, “I know I am called to be saved.””Yes” Father would answer, “and to be damned.” There I firstheard about ordination. I could not understand it, that God should have createdsome people to be saved and others to be damned. My parents were reformed orsame as Presbyterian. Now days early I was taught in the bible and that thebible was true. Heaven and earth might pass away, but the bible would remainforever. About this time when I was fifteen years old, I went away from home tofind work. I went to St. Louis. It was the first time I left home to work out.

Mother and Father bothexorted me to fear God, serve him. Father gave me his hand and said “Fredrich,have God before you and in your heart,” which I never forgot. I found workin a brickyard, and board in a common boarding house where there was a bar-room.I was much tempted to drink with the company, but God helped me to withstand. SoI did not become a drunkard, thank God. In the fall I took sick, typhoid fever Ithink it was. I had to leave St. Louis, went home. Got very sick. Parent’sdoctors all had given me up to die. I heard them say so, in the room I was in.Then I thought — O, where am I going if now I died? I tried to look into thefuture,. O, how dark it was. I saw no light, not a bit. Then I turned over inbed and prayed to God to spare my life, and I would do better. After, I made asolemn vow to God that I would do better if he would let me get well again. Iasked Mother why they did not pray mornings and nights, as they had done before.She broke out in tears and said, “O, Friedrich, you are so sick, and thoseprayers we read out of that prayer book are for well persons, and to read forsick, Father don’t like to do.” I kept on praying as best I could and knewhim. And God heard my prayers and I recovered my health. But now came a smallvoice, “Do better.” But how could I do better? At last a thoughtstruck me, I would kneel down before my bed, before I lay down at night, andpray.

That I did, so this act led me to the conclusion of the family I worked for. That next or same winter following my sickness, there came in the neighborhood a German Methodist Preacher by the name of Franz Horstman. He was a man of God. Started a protracted meeting, many were converted. In February 19, 1846 I attended it, and on Sunday, February 19, perhaps midnight, I found Jesus as my personal Savior. I was saved from my sins. Then that Sunday before I was converted, I joined the M. E. Church. O, never doubted my conversion, never backslide. For all this I thank God, who by his power kept me, hallelujah. I was happy the next morning. O, how everything had changed. I thought the sun had never been so pretty as now. Everything was new, I was new. Born again. I never doubted it. The devil tried to make me doubt; but no, I knew too well. I praised God today that I had such a clean experience. Thank God, amen. Soon after this time the preacher made me a class leader of a class seven miles away from home, where I went two Sundays out of three to hold class meetings. Then I was made an exhorter, and before two years was made local preacher. Had to lead some kind of meeting nearly every Sunday. Then I got afraid that the church would make me a regular preacher. I did not want to be a traveling preacher. Two reasons why not: I saw by this time that preachers were poorly paid, perhaps $150 to $300 a year; and was kind of a beggar life I would work, was willing to work and make an honest living. Second reason was the responsibility was too great. Therefore, I refused to go. Said “No.” I felt the call from God, as God had done so much for me. I should do something for him and his kingdom, yes. Then came the third reason and a strong one. I was not educated for the ministry. Therefore, “No — No.” About this time my parents sold out in Warren County, Missouri. Moved north to Iowa. We settled at Wapello, Louisa County Line. We found a small class of German Methodist, but in bad shape. They were glad of our coming. All seemed to rejoice. Yes, did rejoice. We had good times in meetings for which we thanked God. We rented a farm and after the crop was planted and tended, I went about to look up a suitable place for us to locate permanently; but could not find a better place than Wapello for farming. So Father bought land. So did I determine to be a farmer. Still had the call, that small voice — “go and preach the gospel.” Again got very sick. The devil was after me. God permitted it. Then again I promised God, if he and his church wanted me yet, I would go. I got well. At that time young preachers must not get married before they had successfully worked in the ministry two years. But I had found a girl that I liked and got married. So now I was safe not to go. The church would not want me with a wife. But, about Christmas time came a letter from the President Elder that I must go to Peoria, Illinois and preach for those people else they might be lost and I would be responsible. O, what would I do now? It was a good thing that I had told my girl, now my wife, if God and the church wanted me to go preach, if she would be willing to go with me, she said “Yes.” So I did get married on the 11th of April 1852, when I was 22 years old.

The Des Moines circuit wasdivided. My health failed again. I was not able to take charge and do full work.For that reason I took Polk City and a settlement appointment as my field oflabor. What they would give as my support amounted to perhaps $250 to $300. Imoved in a small house on the open prairie eleven miles north of Des Moines –160 acres which I had bought as a home as I did not think I could ever do fullwork again. I again took up three new appointments; had then five appointments.The first year all went well. But after conference, part of the church membersrebelled. Said it was again the discipline. This would be four years. The rulethen was three years. But a large part of my field was new territory so I couldstay. But the real cause was something else, which I could not control nor wasit my fault. God knows. Then in the spring I was struck by paralysis of thehead. I still preached as best I could. I had hard time fearing all the time, itmight be any time. I had to take one of the boys with me to drive the team, if Ishould fall over. I, with the help of the boys and girls too, farmed the best wecould. Nine children, all small and at home, but we lived through the firstyears as best we could. God was good. God was our friend and help in time ofneed. That second year was better. We had good crops — made hay and sold it.Stock cleared $300. I did not preach regular, but we had good prospect to makemoney — at least $1,000. All this time I tried to get reconciled with therebellious people, but the devil would not let them. My health was poor againand we concluded to move away to get peace. Our daughter Minnie got married toMathew Sexauer — a farmer. 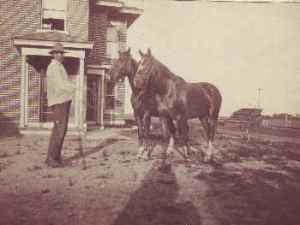 Your Father in Love, F.W. Fiegenbaum.